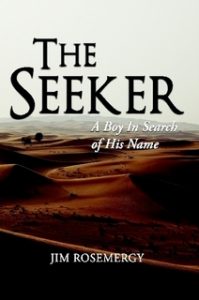 The Seeker: A Boy In Search Of His Name

The Seeker: A Boy In Search Of His Name is an epic journey of self-discovery set in Israel during Jesus’ time.

The reader joins the journey 12 years after the seeker’s tragic birth, when his mother dies in childbirth and his grief-stricken father refuses to hold his son and flees into the desert to die.

The boy is given the name, Bakbakkar, by the mysterious Keeper of Names. Bakbakkar, the seeker, is raised by his uncle and aunt. Their son, Jared, becomes his best friend, but their sibling rivalry erupts in near death and betrayal. Bakbakkar is cast out. At the Riiver Jordan the boy receives his new name and discovers an ability he never knew he had.

He is then faced with a choice. Does he return to the desert with his father, go to Jerusalem and become the son of the woman who supported him before his epic journey began, or return from exile to his aunt, uncle and cousin, Jared? Only a boy willing to fully embrace his new name can find his way home.

Subscribe to FOR THE PEOPLE and get updates in your email inbox.

Thank you for subscribing.

We respect your privacy and take protecting it seriously