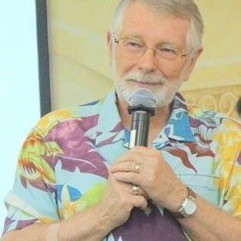 Prior to entering the ministry, Jim served as a naval aviator in the United States Navy as a navigator on a RA-5C Vigilante reconnaissance jet stationed aboard the USS Kitty Hawk. He flew over 100 combat missions over North Vietnam.

Jim was ordained a Unity minister in 1976. His first service to Spirit was to pioneer a ministry in Raleigh, NC. He has served churches in Spokane, WA; Kansas City, MO; Sunrise Beach, M; and Fort Myers, FL.

From 1990 to July 2001, Jim served the Unity movement as executive vice president of Unity School of Christianity.

Rev. Rosemergy has been a regular columnist for Unity Magazine and the author of numerous books: A Recent Revelation, Living the Mystical Life Today, The Watcher, The Transcendent Life, A Daily Guide to Spiritual Living, A Closer Walk With God, Even Mystics Have Bills to Pay, The Sacred Human, The Quest for Meaning, The Third Coming, The Prayer that God Prays, Attaining the Unattainable: The Will of God, and his most recent book, The Gathering. He is also a contributing author to New Thought for a New Millennium, published by Unity School.

Jim is the recipient of 2007 Light of God Expressing Award.

Jim is a popular speaker at Unity ministries and events as well as New Thought spiritual activities.

Jim retired from active ministry in April 2017 and now enjoys golf, kayaking and “glamping” with Nancy in their 27-foot Airstream.

Jim and Nancy have two grown sons who are married to very special young women. They also are blessed with two sweet granddaughters.